by The Great Vehicle 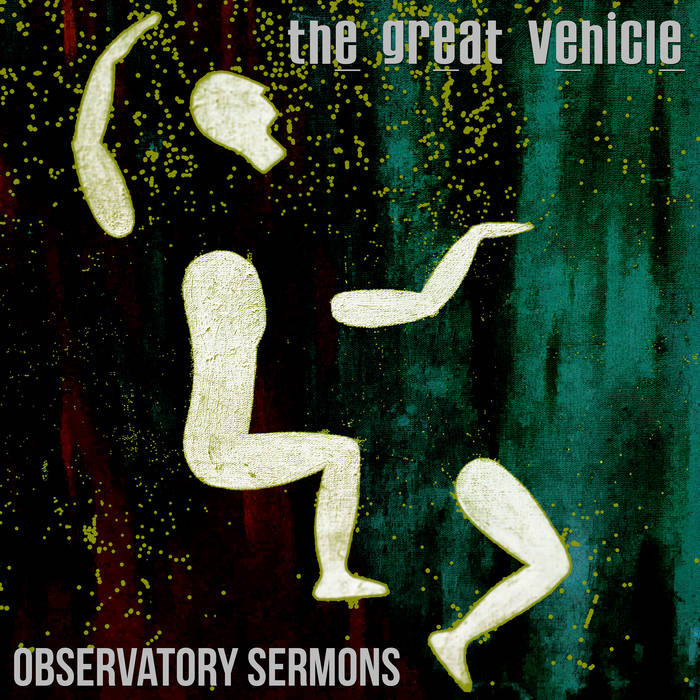 [[Each of the scenarios described below is taking place simultaneously. Right now and always.]]

001 The Man With the Neutron Scalp

[[Neutrons carry no electrical charge; their behavior is essential to the production of nuclear power. Yuri Gagarin, the star of this song, said, "The road to the stars is steep and dangerous. (Spaceflight) isn't the work of one man or even a group of men. It is a historical process which mankind is carrying out in accordance with the natural laws of human development." As he was hurled through space, Gagarin was an analogy: As neutral, yet powerful as a subatomic particle.]]

This song nearly refused to exist. Each time "Neutron" was exported—even by them most ballin' computer we had access to—the mix became haunted by inconsistent glitches and other weirdness. (The machine was anything but "working normally.") The finished product is the result of several subatomic edits. Embedded in this track is the explosive sound of a door slamming shut in the stairwell of a Virginia Beach Sheraton. We know you people love the field recordings. Internal notes about this song make reference to "the Prong section" and "the Queens of the Stone Age riff." Please try to identify these sections in the interest of mental dexterity.

Wherein Betse Ellis makes the Kansas and Mahavishnu Orchestra dreams of those who have such things come true. That's the main melody there in the acoustic intro, reharmonized a fifth lower. We know you people love reharmonization. The melody at 1:54 originated as sort of a guitar placeholder, then took on a most macabre flavor when doubled by Betse. The song is in 7/8, but contains exactly one measure of 8/8. Can you spot it? Do you care?

[[Things can get a little perilous down around the gantry. In fact, near Baikonur Cosmodrome, cases of "launchpad lameness" (стартовая площадка хромота) were once so common that it was easy to identify a certain grade of worker based on his gait.]]

[[So long as a planet rotates on its axis, sundials operate the same regardless of the star supplying the light. The sundials in question happen to be on EPIC 201637175b, an exoplanet orbiting the red dwarf K2-22. This destination is 734 light years from Earth, but due to the nature of this story, listeners there are currently receiving.]]

This piece has undergone many revisions of arrangement, concept, and title. It started as a memorial to a departed friend, then took on more meaning and dedications as more friends departed. Enough with that bullshit, people. This is our first song to feature a ship's bell. (We know how you people ... oh, forget it.)

[[By its strictest definition, a cathedral is a very specific religious edifice. In the scope of the Observatory Sermons legend, a cathedral is any space in which the Invocation of the Bald Chemist is being observed. This may include a frozen warehouse, near a tree, or aboard the Chinese Shenzhou 5 reentry capsule.]]

It's the title track to a different release ... you know, like "Sheer Heart Attack" or "Houses of the Holy." For those interested in the schematic, "Cathedral" is built around a fairly simple 6/4 over 4/4 polyrhythm. Just don't try to listen to the opposite part when you're playing along. Also, the bass and guitar are playing the same repeating pattern, but offset by three notes.

[[NASA ceased communicating with the exploratory spacecraft Pioneer 11 on September 30, 1995. But it's still out there, a ghost ship heading toward Lambda Aquila, a star it will encounter in about four million years. Hitch a ride on that great vehicle.]]

"Pioneer" is The Great Vehicle's longest, most spacious piece. The guitars are tuned, low-to-high, DADFCE, or what you might think of as open Dm9. Y'know, if you wish to do a cover.
The free-form middle section was harvested from the defunct Great Vehicle song "23/24 of Something." It was conceived as a cross between musique concrète and a Calder mobile, and may or may not accidentally owe something to "Cygnus X-1" by Rush (probably don't mention that to Gregg) or possibly "The Grand Vizier's Garden Party" by Pink Floyd (definitely don't mention that to Gregg).

Bandcamp Daily  your guide to the world of Bandcamp